Obviously, if you have any doubts about the safety of Cmdow then don't use it or audit the source code yourself. Auditing should be fairly straightforward as the code is self explanatory with liberal comments and there is no assembly or binary blobs. It compiles without errors or warnings using the free Code::Blocks IDE. There is even a Code::Blocks project file (cmdow.cbp) included in the Cmdow download.

† Ten vendors actually regard passing a zero to the Windows API function ShowWindowAsync as enough to create a trojan!

It is a small standalone executable. It does not create any temporary files, nor does it write to the registry. There is no installation procedure, just run it. To completely remove all traces of it from your system, delete it.

Cmdow was written with batch file programmers in mind. Particular attention has been paid to Cmdows output making it easy to process with the 'FOR /F' command found in the Windows command processor (cmd.exe).

Cmdow is simple and intuitive to use. To list all its options, type:-

Here is a description of the output fields:-

This form of CMDOW performs a single action typically affecting all windows.

This form of CMDOW performs specified action(s) on the specified window(s). Some of these commands allow you to manipulate windows in ways not normally possible. Improper use may cause unexpected results and system instability.

This form of CMDOW executes the specified file or opens it using the application associated with the filename extension.

View help about the /MOV (move a window) option:-

To list details of only the windows listed on the taskbar:-

To list details and positions of only the windows listed on the taskbar:-

where 0x010052 is the window handle of the window titled "untitled - notepad".

Bearing in mind that the Cmdow actions are carried out in the order in which they are specified (that is, from left to right), this example restores, moves, renames and finally activates Calc.exe:-

Batch file to activate a different window every 10 seconds:-

Batch file to close all windows listed on the taskbar:-

Stupid batch file to remove all the buttons from Calculator:-

Batch file to retrieve display resolution. The co-ords of the first window listed by Cmdow is the screen resolution (this window also has a level of zero which can be identifed using FOR /F):-

Batch file to alert Administrator if the number of windows shown on the taskbar changes (as might be the case when an application or the operating system generates an error message, or may be backup software is prompting for a tape etc). Loops every 60 seconds until number of windows changes.

Creating an Autorun CD. Copy your autorun.inf file and cmdow.exe to the root of the CD. Here is a sample autorun.inf. It also shows how add a context menu for the CD. This could be used to install software required by your CD or to view a readme file etc:-

Here is another use suggested by a Cmdow user:-

Cmdow can be used to save the window status and restore it, after the execution of a program. For example, if you are displaying information in a maximised Command Prompt window and then need to call a program (NOTEPAD, perhaps), which gives a second window, the current Command Prompt window is minimised to the taskbar. You would normally need to click on it to restore the original window and give it the focus. You can use CMDOW to save the status of the window, and cause it to be restored automatically in a maximised form, using the following:

How can I filter on image name and caption?

How can I filter on multiple window properties, for example, visible explorer.exe windows wider than 1000 pixels?

How can I disable or hide the desktop?

Running Cmdow without any options lists all windows. The window at the top of the list is the desktop window only as far Windows is concerned (and has a level of 0). However, the window that you and I know as the desktop is found at the end of the list. It will typically be the last window listed with a level of 1 (and by default its caption is "Program Manager"). So running Cmdow "Program Manager" /hid will hide the deskop. If you have another window titled "Program Manager", then you'll need to use an alternative method. See the example scripts.

On a W2K machine running a number of applications that monitor our servers and networks, I have a batch file that runs Cmdow /AT every 20 seconds. Sometimes Cmdow fails to activate an application window, instead the taskbar flashes blue.

This is a new 'feature' of W2K. Its known as Foreground Lock Timeout, and basically prevents another application setting the foreground window. You can safely disable this feature using TweakUI or by setting the value of this registry key to zero:-

When I use Cmdow at a command prompt or in a batch file and try to change the console title. Why does the title revert back when Cmdow finishes or when the batch file ends?

How can I undo the effects of tiling, cascading or minimizing all windows?

In version 1.4.2 the /UM switch has been superseded by /UW. This new switch will undo the effect of tiling/cascading and minimizing all windows. To maintain compatability with existing scripts, the /UM switch can still be used even though it's no longer documented on Cmdow's helpscreen. /UM now has exactly the same effect as /UW. 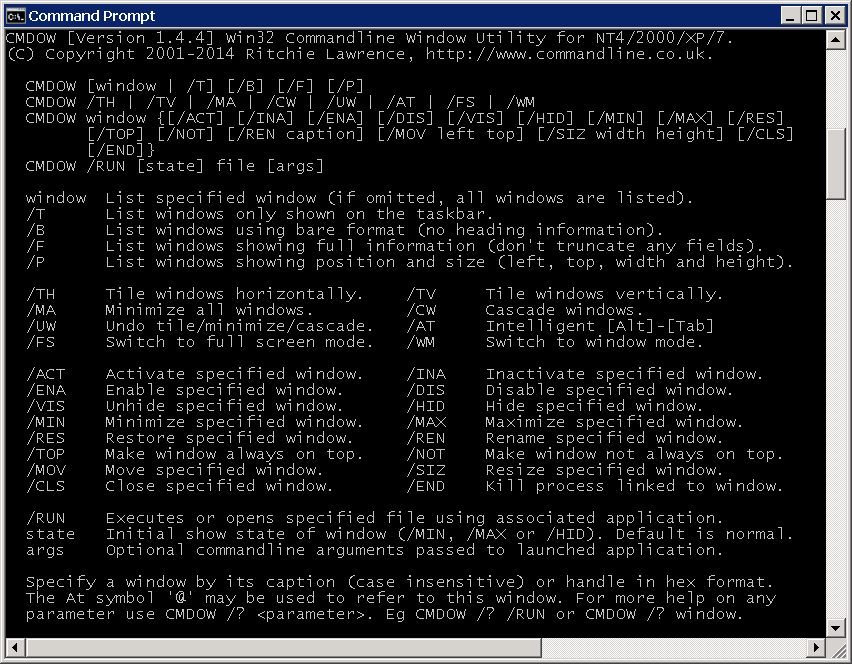 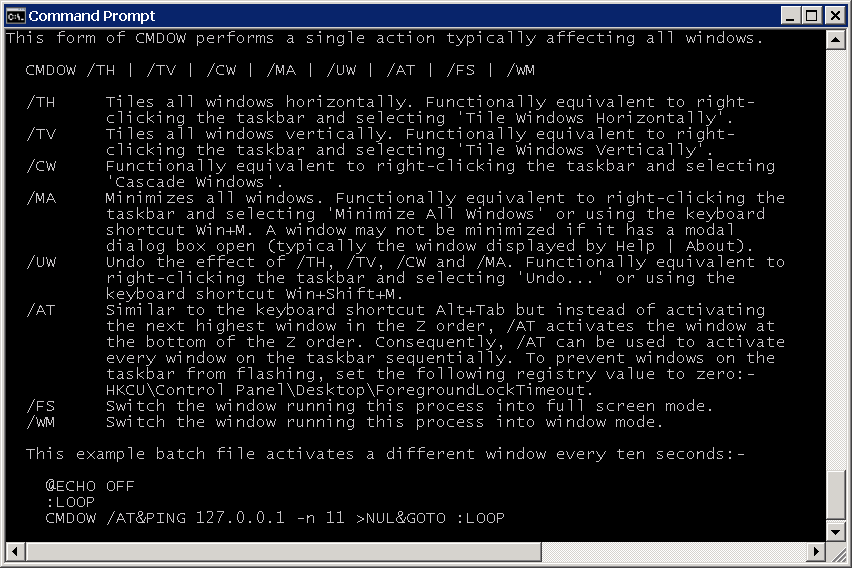 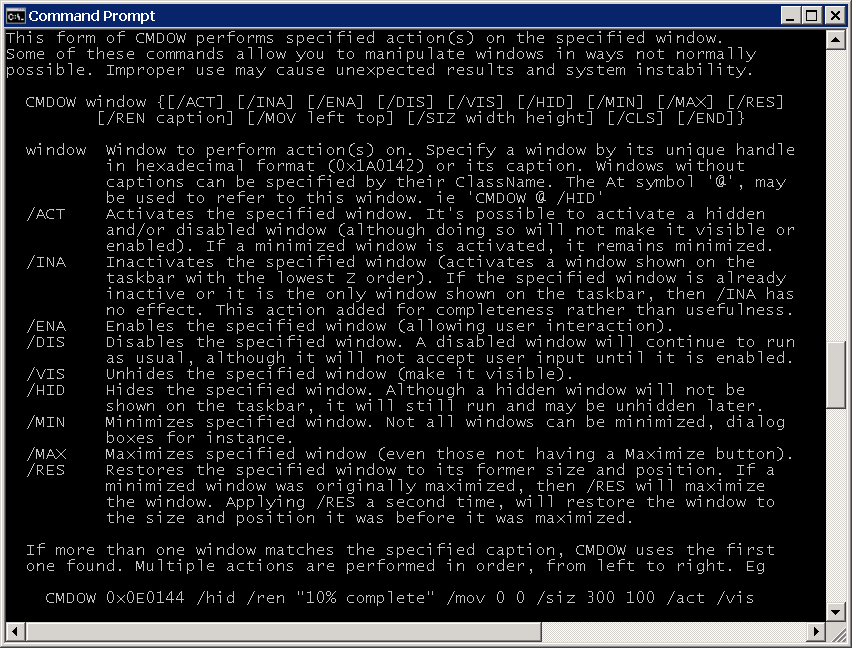 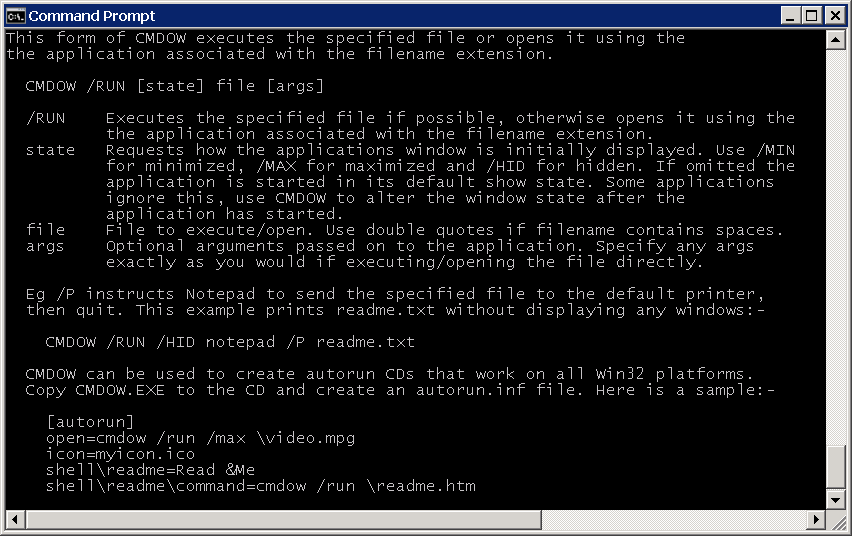